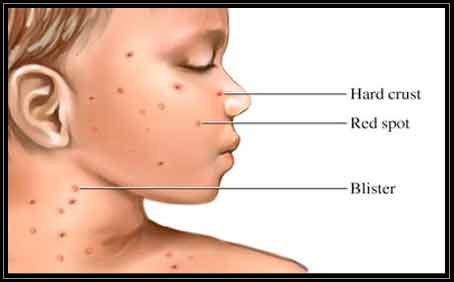 Chickenpox is a common illness, particularly among children. It is characterized by itchy red spots or blisters all over the body. Chickenpox is caused by the Herpes Varicella Zoster virus. It is highly contagious, but most cases are not dangerous.

Chickenpox can be passed on from two to three days before the rash appears until the blisters are crusted over. It spreads from exposure to infected people who cough, sneeze, share food or drinks or by touching the blisters. It is often accompanied by a headache, sore throat and possibly a fever. The incubation period (from exposure to the first appearance of symptoms) is 14 to 16 days. When the blisters crust over, they are no longer contagious and the child can return to normal activity. This normally takes about 10 days after the initial appearance of symptoms.

It is important not to scratch the blisters as it can slow down the healing process and result in scarring. Scratching may also lead to another infection. To help relieve the itching, soak in a cool bath. The child should get plenty of bed rest and can take over-the-counter analgesics to reduce any fever. More serious cases are usually seen in people with other long-term health problems.

Although about four million children get chickenpox each year, it may be preventable via a vaccine. Children should receive two doses of the vaccine — the first between 12 and 15 months and the second between ages four and six. Older children who have not been vaccinated can be effectively treated with two catch-up doses. Adults who have never had the illness should also be vaccinated.

Granuloma is a generic term that refers to a small nodule. It can be any type of nodule, from benign to malignant. Granulomas occur throughout the…

A skin inflammation that occurs in warm, moist folds of the body where two skin surfaces chafe against each other. It most commonly appears on the…

Read More
Categories
Recent Posts
Back to the top